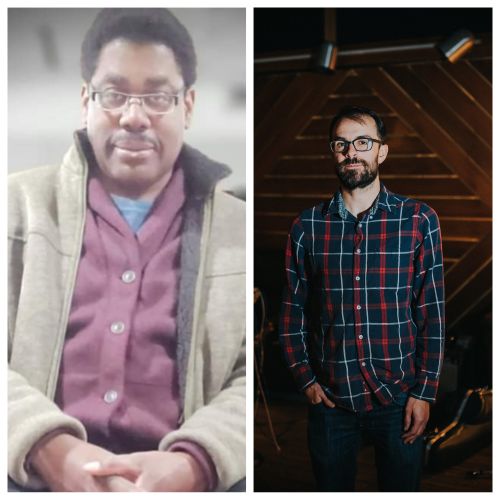 Edmonton musicians Dan Davis (saxophone) and Mboya Nicholson (pianist) have been on the jazz scene in various places and dedicated to their craft, for decades. Their love for the music led both to further their studies and both earned masters degrees in jazz – Nicholson at the University of New Orleans; Davis at the University of South Florida. As an instructor at MacEwan University, Davis relays the musical insights he learned to the next generation. In addition, he co leads the WCMA-nominated new music collective, The Writers Guild.

Mboya Nicholson has performed for audiences in Asia, Europe and South America. In 2015, he was commissioned by Colin Morris’s organization ArsMusica, to write a jazz suite about the Humber River Valley in Toronto.

That same year, in Edmonton, Dan Davis won the Edmonton Music Award for his song, “What Happens Next”.

Currently, both musicians reside in Edmonton, writing and, through various ways via techmology, teaching, giving lectures and performing.