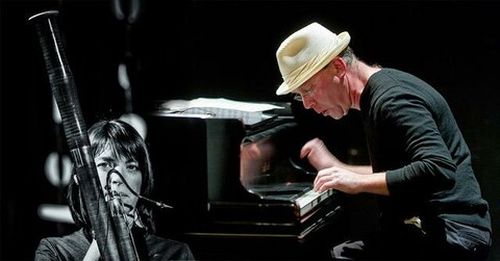 Composer and pianist Wayne Horvitz continues touring in support of his new CD “The Snowghost Sessions” on Songlines Records. Horvitz may be best known for his work with John Zorn, Reggie Watts, Bill Frisell, Butch Morris, William Parker, Robin Holcomb, Gus Van Sant and many others. He is also the recipient of the 2016 Doris Duke Performing Artist Award. In this project, Horvitz teams with two of his favorite Seattle musicians, drummer Eric Eagle and bassist Geoff Harper.

“The Snowghost Sessions” was recorded over a weeklong residency at Snowghost Studios in Whitefish, Montana. It is Horvitz’s first trio record since the 1980s, and his first piano/keys-bass-drums record ever. Wayne describes the working vibe: “I’ve never felt so free of expectations in the recording studio in my life. The sessions were relaxed, creative, and without a specific goal. We didn’t set out to make a record, we just set out to enjoy the process. I wanted find an organic marriage between the idea of a piano trio and some ideas I’d been exploring with amplified and processed piano.”

In addition, this performance will feature special guest bassoonist Sara Schoenbeck. They perform frequently as a duo. Schoenbeck and Horvitz first met as performers at the improvisation festival “Time Flies” in Vancouver in 2000. Sara dedicates herself to expanding the sound and role of the bassoon in the worlds of classical, contemporary notated and improvised music. Horvitz and Schoenbeck have been frequent collaborators since 2000 in The Gravitas Quartet, Some Places Are Forever Afternoon, and numerous improvised collectives and performances. They are dedicating their long time collaboration to duo spaces of original music and improvisation. A study of the crossroads where texture and extended technique meet with and support the expression of melody and song, they have recently completed their first recording as a duo for release later in 2019.

Tickets available at the door, or

BUY YOUR TICKETS AT TIX ON THE SQUARE